If there is anything human to remember of the 20th century when its last survivors have finally died, it will likely be remembered through the frame of Henri Cartier-Bresson’s viewfinder. Armed with a 35mm Leica camera and an unerring eye, Cartier-Bresson sought to capture the “decisive moment” of history and humanity, from a Gestapo informer exposed at the Dessau DP camp in 1945 to a couple leaning into a kiss at a Paris sidewalk café.

Cartier-Bresson’s photography framed the 20th century with expansive depth of field, capturing the historic and the intimate in the sharpest possible focus. His great photo of Lord and Lady Mountbatten with Prime Minister Jawaharlal Nehru on the steps of Government House in Delhi in 1948 is perhaps the greatest example. India had become independent, yet for a time, Lord Mountbatten remained as Governor General – a figurehead of the British Empire. There he stands stiffly, a marble statue in his starched Royal Navy uniform, while Nehru and Lady Mountbatten share a joke. Humor subverts the grim solemnity of empire; the joke is on Britain, and Lady Mountbatten is in on it. 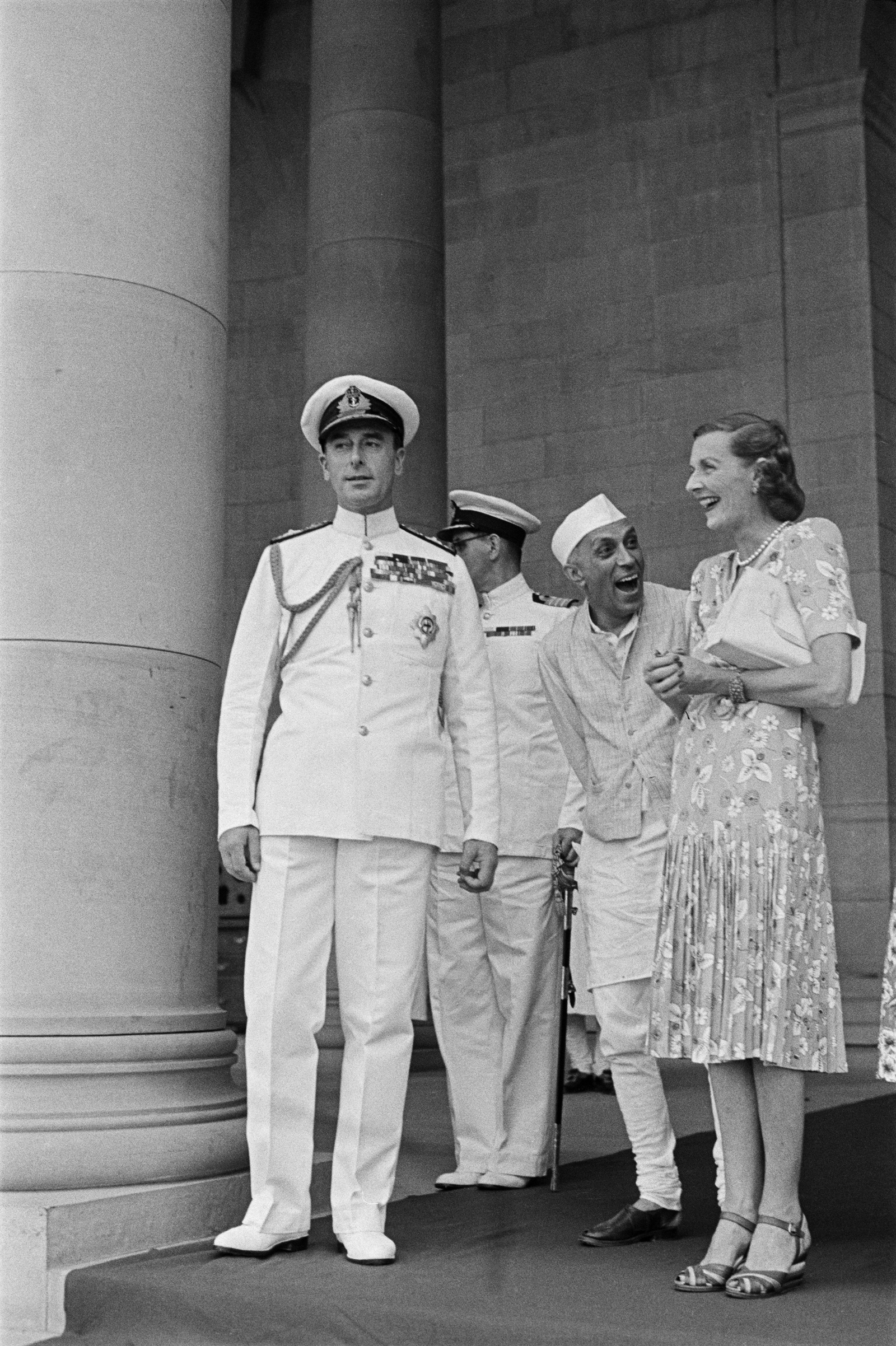 Cartier-Bresson arrived in India in January 1948 as the correspondent for Magnum Photos, a photography cooperative he had founded with Robert Capa, Chim Seymour, George Rodger and William Vandivert a few months before. He was one of only two foreign photographers (along with Margaret Bourke-White) with access to Mohandas Gandhi and other Congress Party leaders. As Bourke-White quickly fell out of favor with her intended subjects, Cartier-Bresson’s photographs would be the ones that framed Western narratives of Indian independence and Partition. Henri Cartier-Bresson: India in Full Frame, an exhibition at the Rubin Museum in New York, marks the 70th anniversary of those events by providing a view through the photographer’s lens.

Cartier-Bresson could find a spark of humanity in his subjects, even when they were anonymous strangers. One of the pioneers of what is today called “street photography,” he invariably approached people with great sympathy, catching them in the fraction of a second. “Your eye must see a composition or an expression that life itself offers you, and you must know with intuition when to click the camera.”

Indeed, the best photos in the Rubin exhibition contain that spark. The photo of Nehru and the Mountbattens is evidence of the deep affinity Cartier-Bresson had for the Indian leader and Lady Mountbatten and, to be honest, his indifference for the Governor General. His photos of Gandhi shortly before his death, and of the private anguish at his very public funeral are both epic and deeply tender. One photograph captures the pain on Gandhi’s private secretary’s face as he watches the flames rise to consume the funeral pyre, while Nehru, standing with his back to the camera, raises his hands to the assembled multitudes in a gesture of both command and resignation. Cartier-Bresson here captured a “decisive moment” on film that was both too simple and too complex for words. 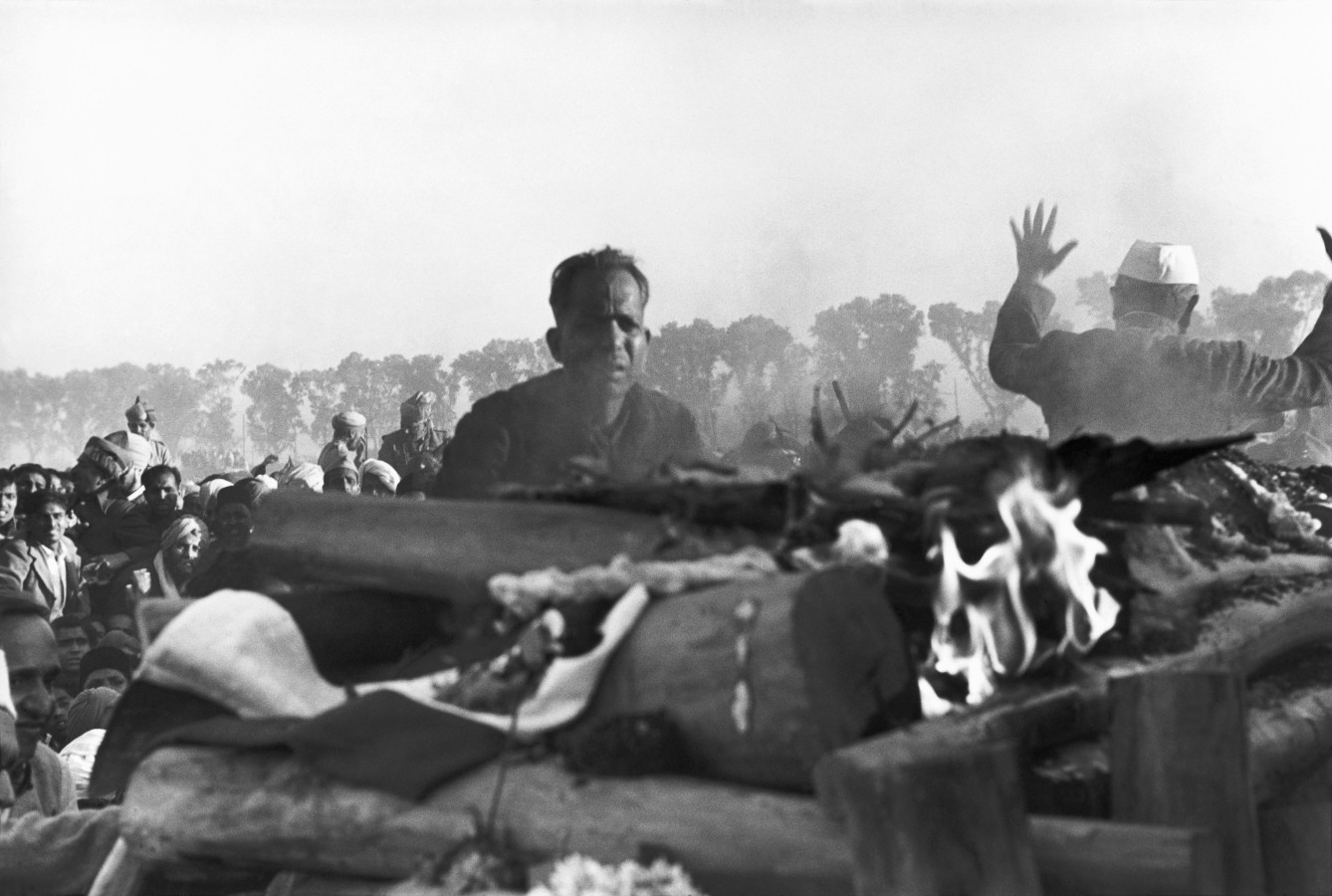 For all of the eloquence of these images, however, the Rubin exhibition is primarily a showcase of how Cartier-Bresson’s photographic eye failed when faced with the alterity of India and the scale of the human tragedy of Partition. The majority of the photographs on display show the vastness of India, and the enormity of the events of 1948 in grand, sweeping panoramas of landscape and humanity. There are huge assemblages of people on the move, migrant camps that stretch from one edge of the frame to the other, trains overflowing with refuges that reach to the infinite horizon. It all has the sweep of a David Lean film, yet rarely is there that flicker of the “decisive moment.”

Many of Cartier-Bresson’s photos are simply static tableaux of Great Moments in History. The faces staring dully from the trains are anonymous; the starving women and children in the camps are simply types that would be at home in an ad for the United Way. While this kind of documentary photography has an important illustrative value, there is nothing about it that speaks either of Cartier-Bresson or of his subjects. Indeed, his most successful photograph of Partition only highlights this failure. It is a picture of men exercising in a Punjab migrant camp. Suspended in the moment, they look like dancers in mid-pirouette; it is a brilliant study of kinetic energy frozen in time. But it could be any group of people anywhere. There is no hint of either suffering or joy; it is a study of figures, but not of humanity. 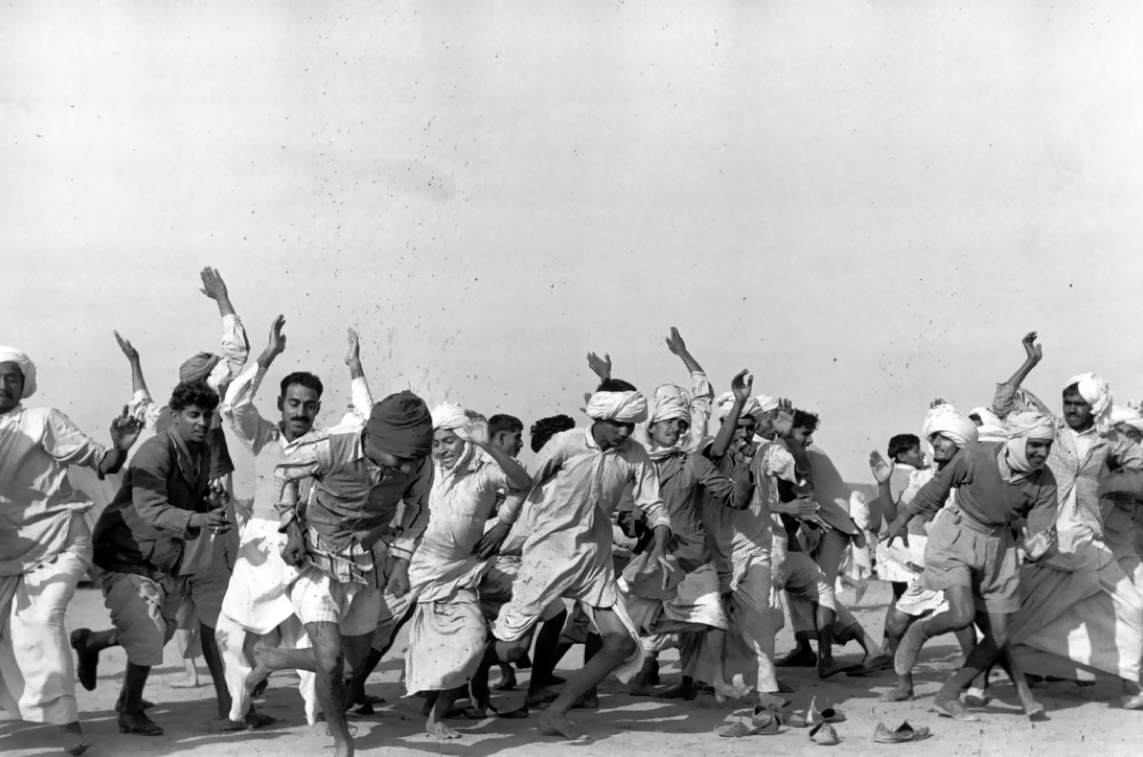 Even in his natural environment, photographing the street life of Delhi and Bombay (Mumbai), Cartier-Bresson’s keen photographic eye somehow fails him. In his photo of an astrologer’s shop in Bombay, two men – the astrologer and a shopkeeper – take a break from their cigarettes to look at the camera with expressions of – is it indifference? There is no hint of inner lives, no “decisive moment,” merely two figures serving as the backdrop for a mildly interesting document of the timelessly exotic Orient. Cartier-Bresson has traded the sympathetic perspective he brought to the streets of Paris for a flat, ethnographic gaze.

This is the photograph the museum used in most of its marketing material, and it articulates the Rubin curators’ own ethnographic viewpoint. The biographical note at the entry point of the exhibition suggests that Cartier-Bresson’s marriage to the Javanese dancer Ratna Mohini somehow endowed him with a greater perspective on Indian culture and politics than other Western observers. The curators seem to be suggesting that the people of Asia, regardless of whether they are Indian or Indonesian, are somehow fungible. It is a troubling idea that flattens the vast expanse of humanity outside the global North into an undifferentiated mass of “other.”

Yet this was the basic assumption of postwar West, and Cartier-Bresson, Magnum Photos and the publications they supplied with images – Life, Time, and Paris Match among many others – were its agents. And it is here that India in Full Frame has its greatest value: as an unwitting record of the “decisive moment” of cold war liberal internationalism, an artifact of the time when, in our arrogance, we could view the world beyond our cultural borders as an abstraction. When we look at it through that lens, India in Full Frame is an important exhibition, indeed. 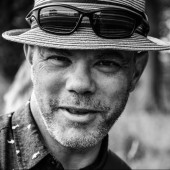