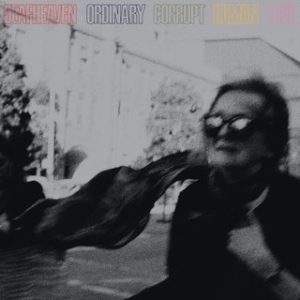 Deafhaven ain’t your average metal band.  They’re also hard to pin down, their albums all sound divergent from each other, which is unusual, really.  Bands usually find a sound and stick with it, or at the least, their evolutions are more predictable.  And even across albums, the sound evolves and changes, incorporating elements from everything from metal to post-rock and everything in between.  Ordinary Corrupt Human Love, despite its cynical title, is both a beautiful and heavy album.

It starts with a spoken word story read by Nadia Kury over a beautiful piano riff and soaring guitars on ‘You Without End.’ Vocalist George Clarke’s howling madman vocals get buried in the mix on this track and it generally remains so throughout the album.  So, in a way, Clarke’s voice becomes another instrument, and one that remains at odds with the shimmery guitars and steady rhythms of the band on Corrupt Love.  On ‘Honeycomb,’ the second track, a heavy Black Sabbath by way of Faith No More riff holds sway and Clarke’s voice shimmies over the guitars and beat before a lulling ending punctuated by a hypnotizing bit of guitar.  And this is what seems the biggest difference in this album from earlier ones, the two guitarists, Kerry McCoy and Shiv Mehra, play melodic, shimmery bits more than gut-slamming riffs and shredding metal guitars, though the latter are still there at the core, just in reduced form.  Penultimate track, ‘Night People,’ sees folk singer Chelsea Wolfe (along with Ben Chisolm) contribute the vocals

The cynicism of the title, though is authentic.  The album emerges out of difficult times in the wake of New Bermuda, their 2015 album.  Following the tour behind that album, bassist Stephen Clark quit, whilst other members were dealing with depression, substance abuse, and creative burnout.  It’s cliché to say it, but Deafhaven is all the better and stronger for the problems, judging by this eloquent, understated, and amazing new album.