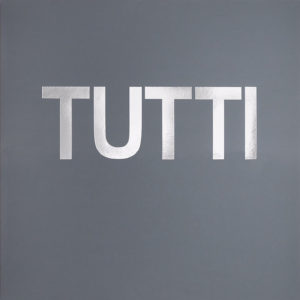 It is amazing to think that this is Fanni Tutti’s first solo album in 36 years, given how much music she has been produced in partner with others, from her pioneering work in Throbbing Gristle in the 70s, to working with her husband, Chris Carter, in Chris and Cosey in the 80s, through more recent albums, including a project with members of Factory Floor a few years back.  She is one of the most prolific artists I can think of, and central to the development of the music form we call ‘industrial.’  Industrial kind of hit the stratosphere in the early 90s with the massive success of Ministry and then Nine Inch Nails, but much of that seemed closer to metal than the original form of the music through artists from Throbbing Gristle through Skinny Puppy and Cabaret Voltaire, which was both insanely heavy with beats around 125bpm and menacing, growling vocals, when they existed at all.

TUTTI is meant to serve as a form of companion piece to her memoir, Art Sex Music, which came out in 2017.  She has claimed this album expresses her full self, and is the only recording she has been involved in which does that.  It was also the soundtrack to a short biographical film, Hamonic Coumaction.

The entire album is a rumbling of heavy industrial beats, and she does a masterful job of both sounding contemporary as well as nodding to her past in music.  There’s something deeply unsettling in the deconstructed, dissonant sounds that emerge from TUTTI, all centred around that propulsive beat.  Album opener, ‘Tutti,’ echoes the beat, with the bass swarming and the distended sound of a cornet haunting the track.  Meanwhile, ‘Sophic Ripple’ emerges out of the ether with an almost film-soundtrack hum before that is joined by disjointed sound effects and noises before the beat appears. The song eventually mutates into a chugging electronic sound, with an almost supersonic boom of bass swirling in and out, though the beat itself never takes off.  In other words, we have a classic industrial drone track here. ‘Heliy,’ like nearly all the tracks also emerges out of vague soundtrack of distended beats and electronic noise before slowly unfolding into a propulsive beat around the 1:40 mark and then Fanni Tutti’s ethereal vocals float over the track; we can never exactly figure out what she’s saying.

Taken as a whole, TUTTI is both a classic industrial album, but it is also an exercise in ambient dub.  The bass sound of the bulk of the album is heavily filtered to have this classic dub sound.  A welcome collection of thoughts, noises, and soundscapes from one of our most influential artists.