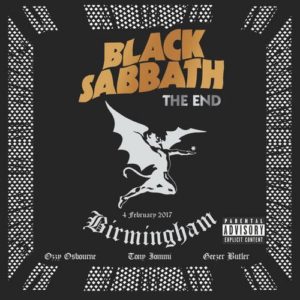 Black Sabbath packed it in earlier this year.  The original members had got back together in the 2000s, ending the era of Tony Iommi and a rotating cast of guests.  Sure, some, like the late, great Ronnie James Dio, filled in admirably. But, otherwise, Sabbath was largely forgettable without Ozzy, Geezer, and Bill Ward.  Nevermind the fact that that sentence sounds like the Muppets Band.  Ward was forced out a few years ago, largely for health reasons.  The lads ARE all fast approaching 70, and they’ve lived harder than your average 70 year old.  Iommi has defeated cancer.  Twice.  And Ozzy.  Well, yeah.  Ozzy.

The End Tour was an 81-concert extravaganza that took Sabbath around the world, more or less.  It began in January 2016 in Omaha, NE, before finishing up with two nights back home in Birmingham, where it all began in 1968.  For me, Black Sabbath had kind of become a nostalgia act, despite their relatively ok 13 album in 2013 (13 was their first #1 album since 1970’s Paranoid).  But, man, what a legacy.  They were a heavy force in music, progenitors of heavy metal.  And so on.  You know the story.

The End was recorded on the last night of the tour, the last Sabbath show ever, on February 4, 2017 in Birmingham (no, not in Alabama).  As I listened, I thought of the weight of history weighing down on the shoulders of Ozzy, Geezer, and Iommi.  Nearly 50 years of Sabbath, give or take a decade or two for Ozzy.  The songs, the tours, the fights, the drugs, and so on.  And then the cultural weight and import of Black Sabbath as the so-called inventors of heavy metal.  But it’s deeper than that; simply put, Sabbath are one of the most important bands in rock history.  So what went through these men’s heads as they stood on that stage for the very last time in February?

The End is surprisingly excellent.  Iommi and Butler form a formidable pair on the low end, before Iommi’s guitars soar into his solos.  And, somehow, Ozzy’s voice, despite a life-time of wear and tear and drugs and alcohol, has held up.  Sure, he doesn’t sound quite as manic doing final encore song ‘Paranoid’ as he did on the original in 1970.  But he sounds pretty damn good.  Of course, if you can decipher what he says in the spoken interludes, you’re doing well.  I just got visions of Ozzy on his family’s reality show in the aughts in mind.  And that’s an image of Ozzy I’d rather forget, the doddering old man with the bratty kids.  I prefer to think of Ozzy with his black mascara running down his face as he screams about the devil or some such thing.

But, really, for me, the core of this album is set around ‘Iron Man’ and ‘War Pigs’.  On both of these, Ozzy’s voice hits the notes, and the music is heavy and formidable.

Something is, of course, lost without Ward manning the drum kit.  He is one of the better drummers in the history of rock; his slightly unconventional style is part of what added the sense of danger and menace to Sabbath in the original set up.  And while his replacement, Tommy Cluefetos, is a wicked drummer in his own right, he’s not Bill Ward (this was my problem with 13, too).