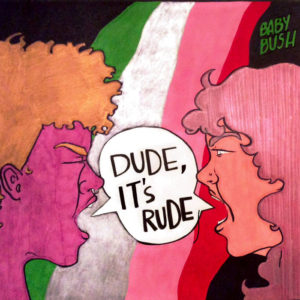 Baby Bush are a punk band from Philly, made up of a bunch of university students.  Dude, It’s Rude is their introduction to the wider world, their manifesto, if you will.  And that manifesto is made up of some angry feminist music.  It’s soothing to the soul to hear the kids pissed off and insistent on changing the world.  Hell, this is what punk is SUPPOSED to be: angry, biting, and fast.  And Baby Bush are all three.

Frontwoman (as an aside, my MacBook is telling me that that is not a word, whereas frontman, well, that’s fine) Eliana von Krusenstiern is of the Kathleen Hanna School of Punk Vocalry.  She chants, screams, and yells her words.  I am particularly fond of her work on ‘Strange Girl,’ which is auto-biograpgical, as it would seem.  As any woman will tell you, it’s exhausting to be objectified, cat-called and otherwise harassed on her way through her day.  It’s not just on this track, the entire 5-song ep repeats the same message.

Musically, guitarist Emily Dombrovskaya lays down some minimalist riffs, her guitar never really getting in the way; she prefers the understated method.  Meanwhile, rhythm section, bassist Sophia Abraham-Reveson and drummer Steve Campos-Seligman, lay down a pretty classic punk groove.  Abraham-Reveson’s bass is prominent in the mix, keeping a live a long punk tradition.

The joy and exuberance of Baby Bush carries them through this début ep.  I look forward to what comes next.