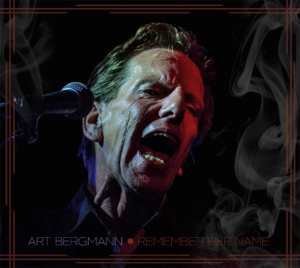 Art Bergmann should be rich and famous.  He is Canadian punk rock nobility.  Away back in the mists of time (and the rain forest Vancouver is carved out of), Bergmann was the frontman of the seminal punk band, the Young Canadians.  Vancouver was once a major epicenter of the punk rock world, but no one knows this.  Perhaps it’s because Vancouver is isolated in the Pacific Northwest, deep inside that rain forest.  The nearest city is Seattle.  And in the late 1970s and early 1980s, Seattle was as unimportant as Vancouver.  But Vancouver was where punk developed on a level not seen elsewhere, other than maybe NYC and London.  The biggest bands to come out of Vancouver were DOA, the Pointed Sticks, and the Subhumans (not to be confused with the UK Subhumans).  Vancouver was also central to the development of hardcore in the early 80s, through DOA, SNFU, as well as NoMeansNo and the Hanson Brothers, amongst others.  Members of the Vancouver scene could be found later on in bands like Social Distortion and Danzig.  And Art Bergmann was at the center of this center.

The Young Canadians could write a wicked hook, something seen in their two biggest ‘hits,’ ‘Hawaii‘ and ‘Fuck Your Society.’  The Canadians split in 1980, and Bergmann went solo.  A master songwriter, he has been compared to Paul Westerberg, of the legendary Minneapolis band, the Replacements.  Westerberg never really got his full due, just like Bergmann, and truth be told, Westerberg should be compared to Bergmann.  Through a series of disasters due to any number of reasons, including drugs, record labels, producers, and other natural disasters, Art Bergmann never found his fame and fortune, despite a series of very well received solo albums in Canada.  The problem for me, a long-time fan of the man, was his music was poorly produced and killed by the record business.  To wit, his first solo album, Crawl With Me (1987), should’ve actually been billed to his band at the time, Poisoned.  But Duke Street Records, a lamented, defunct Canadian indie label only wanted Bergmann.  So Poisoned became his backup band.  It got worse.  The legendary John Cale was brought into produce the album.  And he nearly killed Bergmann’s songs with his heavy-handed approach.  Bergmann and Poisoned had originally demoed the album with Bob Rock and Paul Hyde, of the Vancouver band the Payola$ (though both have gone on to production fame, especially Rock).  In 2009, Bergmann released the demo version, as The Lost Art Bergmann (only in Canada, pity), and the difference was marked.  This was Art Bergmann playing Art Bergmann, loud, crunchy guitars, and dirty.  The rest of his oeuvre from 1987 to 1995 was like this, though there is plenty of genius to be found in there, especially his 1990 album, Sexual Roulette, and his 1995 opus, What Fresh Hell is This?

After he was dropped by Sony Records when What Fresh Hell didn’t sell (I don’t know what they expected, they didn’t promote it, I was a music writer in Vancouver then for the unlamented Grind magazine, Sony refused to send us the album), Bergmann disappeared for a long time.  He eventually resurfaced on a farm in Alberta, got himself on Twitter, and then found some younger musicians who recognized his genius.  Bergmann released an ep and then a full-lengther, both wickedly vicious, 2014’s Songs for the Underclass EP and then The Apostate in 2016.  Curiously, the latter is categorized by iTunes as ‘Folk-Rock.’  It is not. Loud guitars, and a screeching old guy.

Remember Her Name is a re-mastered, re-titled version of his eponymous 1991 album.  It was a hit on Canadian radio, but it was also slick.  Really slick.  It was the first Bergmann album I didn’t like, and remains the only one I don’t like. The re-master was done by Noah Mintz at Lacquer Channel Mastering in Toronto.  The lead-off song of the album has also been re-titled.  Bergmann originally called it ‘Marianne Faithful,’ in homage to the singer, but his label balked, fearing legal action (in retrospect, Bergmann’s labels may have ruined his career).  The re-master has re-built the album as I presume Bergmann wanted it, most guitars, bass, drums, less gloss and slick production.

For Bergmann himself, this is also a special album, as he recorded it around the time he met his wife, Sherri, who has says is the muse behind several songs, including ‘Ruin My Life’ and the hit, ‘Faithlessly Yours.’

We are in the midst of a long overdue Art Bergmann renaissance.  And it is very cool to see the man finally get his due in Canada.  It would be justice to see him get his due in the United States, too.  Along with the 2014 EP and 2016 long player, and Remember Her Name, Bergmann is back to touring across Canada, and receiving the accolades he should’ve got in the 1970s.  One of my favourite of his tracks is ‘Dirge No. 1’ from his Sexual Roulette from 1990.  Bergmann played the Halifax Folk Festival on August 31 this year, playing with a collection of local musicians, the Halifax All-Stars, and footage of the gig is on-line, including one of the most intense, vicious versions of ‘Dirge No. 1’ I’ve ever heard.  Check it out (the song begins at around the 1.30 mark).