translated, with a prefatory note, by Max Cavitch

With Ukraine on the front page, I feel my shadowy Russian-Jewish forbears looking over my shoulder each day, as I read stories of Moscow’s mad and murderous grab for a neo-Soviet regime. In the early years of the previous century, in some shtetl along the Dnipro River north of Kyiv, my paternal great-uncle and namesake decided it was time to flee both his tyrannical father and the bloody late-imperial pogroms. Once in the U.S., he facilitated the emigration of other family members—among them, eventually, my paternal grandparents, Solomon Kazakevich and Bessie Rabinovitch. Many others remained behind. A few were conscripted by the Tsarist Army. Others embraced Bolshevism, including another great-uncle, Emmanuil Genrikhovich Kazakevich, from Ukraine’s Poltava Oblast, who went on to become a highly praised Soviet author—winner, in 1948, of the Stalin Prize for Literature. But most of my forbears who chose to stay were disappeared from history. Perhaps scattered traces of their bones are being freshly churned up from the soil by Putin’s tanks and missiles.

So too, perhaps, the bones of Leo and Fritzi Antschel, parents of another Jewish writer from the Pale of Settlement: Paul Antschel, who later changed his last name to Celan. During the war, Leo and Fritzi Antschel were both sent to an internment camp in the Transnistria region of Nazi-occupied Ukraine. Their son ended up over 200 kilometers away in a Romanian work camp. In Transnistria, Leo died of typhus, and shortly thereafter Fritzi was shot for being unfit to work. It’s uncertain exactly how and when their son learned of their deaths. But sometime in 1944 he wrote a poem in which he imagines receiving a letter from his mother, informing him of his father’s death. Originally called “Mutter” [“Mother”], Celan later changed the title to “Schwartze Flocken” [“Black Flakes”]. This poem has been far more ably translated by experts, but I weave my own version here, in memory of all the Kazakeviches and Rabinowitzes whose news no one ever brought.

Snow fell, lightless. A moon
or two it’s been since Autumn in monkish habit
brought news to me as well, a leaf from Ukrainian hills:

“Just think, it winters here too for the thousandth time
in the country, where the widest river flows:
Yaakov’s heavenly blood, blessed by axes…
O ice of unearthly red—there wades your Cossack with all his
train under darkening suns…Oh for a cloth, child,
in which to wrap myself, when helmets gleam,
when the pinkish icefloe cracks, when snow covers the bones
of your father, crushed beneath hooves
the Song of the Cedar…
A cloth, only a bit of cloth that I keep
near me, now you are learning to cry,
the straits of a world that never greens, my child, your child!”

Autumn bled from me, Mother, the snow burned me:
I sought my heart that it might weep, I found the breath of—ah!—summer,
it was like you.
The tear came to me. I wove my bit of cloth. 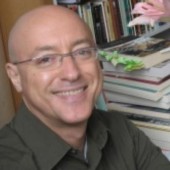 Max Cavitch is a professor of English and Comparative Literature at the University of Pennsylvania, where he is also Co-director of the Psychoanalytic Studies program. When not engaged in “constrained writing,” he lets loose in books and essays on a variety of topics, edits the blog Psyche on Campus, and contributes to the public-science project iNaturalist.