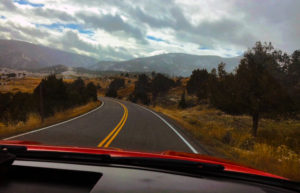 I’m a fallen vegetarian—I’ve renounced my renunciation, I’ll eat anything—and I’m on the road in Yellowstone National Park with James Bruggeman, a friend who shoots deer, elk, sheep, whatever, with a high-powered rifle, and has since he was a kid.  But as we’re watching out for the animals we want to see (wolves, especially, but elk and buffalo will do), he’s the one who opens the inevitable conversation on hunting with a dissertation on sentience that would make Gregory Bateson proud, or James Lovelock blush. Herewith a transcript of that conversation.

James Bruggeman: “These are moral beings. They learn, they love, they educate their children, they form communities. When I kill one of them, I’m committing murder.”

James Livingston: “They’re sentient beings, OK, so are plants and trees, but they’re not moral beings in the sense that they know right from wrong, no matter how changeable those categories are. They’re operating by instinct. There’s no narrativity happening here. But if they are moral beings, why aren’t you on trial?”

JB: “I don’t know. And I gotta say, they’re as conscious as we are. I don’t know about narrativity, that’s for Hayden White to sort out, but it’s not all instinct with animals. You think the difference is we’re self-conscious, OK, how often is that? How often does any one of us read or write words on a page? Or tell the story that would make sense of our lives? Most of what we do everyday is a reflex, not a thought. Like animals. Why do we expect thinking of them when we don’t do it ourselves?”

JL: “All right then, why do you keep hunting? Killing sentient beings?”

JB: “C’mon, it’s in my blood, this hunting and fishing thing. Look around, what else is there to do? You hunt and fish or you ski, that’s about it. Or you drink.”

JL: “You sound like Gregory Bateson, you know this guy? Old school philosopher, but the AI crowd is catching up with him.  All sentient beings, plants and animals included, are endowed with ‘mind,’ his word, the ability to produce and cope with ‘information.’ Question is, can they respond to the ‘news of difference’—new information, radical change—without recoiling or expiring.  Or just running away. The world is alight with ‘mind’ in Bateson’s sense, OK, I’ll give you that, but is all this sentience on view purposeful, or just instinctual, a function of drives?”

JB: “Like I said, it’s not all instinct. Tim Ingold is my hero. He actually cites Bateson somewhere, but James Gibson is Ingold’s hero. That’s the guy. Look, I’ve hunted all my life, which means that I’ve killed animals, most often without compunction. Sometimes I’ve watched the light fade from their eyes.  And I’ve seen the fear in their eyes before the light fades, because they know I’m about to kill ‘em. I’ve gazed into this abyss—I’m quoting somebody, I forget who—and now it stares back at me.“

JL: “Wait a minute. Animals fear death, but only at the hour of their death. They don’t foresee it, like we do—they just run from it.  Us humans know we’re going to die long before the event, so we create cultures to make sure our names and our deeds endure. We write shit, anyway, we store our knowledge, and try to pass it along to the next generation. We want to be remembered. Animals don’t.”

JB: “Grizzlies teach their young! I’m seen them do it.”

JL: “How? Saying, here’s what we’ve always done, but I’ve got a new way of doing things? Nah. That’s what us humans do because we have the privilege of doing so. We have language, we can write it out. Remember that example Marx used? The spider’s web is more intricate and beautiful than any structure human beings have built, but we first raised it in our minds, as an idea. The spider didn’t.”

JB: “Marx isn’t the last word on everything.”

JL: “I’m with you, but here’s where the paradox of work becomes the key to ‘Nature,’ no? ‘He grasps labour as the essence of Man,’ Marx says of Hegel, huge compliment, but what he’s saying is what the Protestants said—what separates us from the animals is not ‘mind’ as such but the purposeful character of our social labor. Also the important fact that we build upon previous generations of intellectual accomplishment and material achievement.” 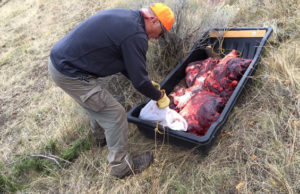 JB: “The point is not that we’re animals like all others. We are, but that’s not all we are. We’re not bodies plus minds, you see what I’m saying? Our minds determine our bodily functions, our culture tells us what is acceptable, actionable. Ingold makes fun of the idea that thinking or consciousness or whatever requires ‘imagined future states’ in the mind of the sentient being, because most if us aren’t thinking ahead in our everyday lives. Animals understand their environments, they adapt, they change their habits. Like us.”

JL: “That’s Hegel talking, well, it sure sounds like him.”

JB: “Fuck Hegel, I’m talking about the morality of killing another sentient being.  I struggle with it.”

JL: “OK, if trees are sentient beings, and in Bateson’s or Ingold’s terms they are, then it follows that we’d better not cut them down and turn them into wood, for furniture or whatever. We’re killing a sentient being, what’s lawful or ethical about that? It seems to me that if you’re right, we have to abstain from the material world, become hermits or monks, or at least vegans—we have to refuse the Reformation.”

JB: “Look, I kill animals and I eat meat and all that, but dietary choices don’t follow from which side you fall on, how you answer the question, hey, are trees sentient beings or not? At least I don’t think they do. Or, I don’t think they should. Once upon a time, animals, predators, fed on us, in a natural order. Then we broke out of it.”

JL: “No, no, sorry, I mean, he said we couldn’t abstain from the sinfulness of our embodiment, and insisted that this worldly condition of ours was the only way to grace—not heaven, but grace, the forgiveness of God. Not to mention our neighbors.”

JB: “All right, then. I’ll give you that. When did you get so religious?”

JB: “You mean it’s social theory, because it sure as hell ain’t philosophy.”

JL: “All right then, I’ll give you that. When did you get so cantankerous?”