You might expect mathematics, abstract as it is, to be immune to free speech controversy. But a particularly vicious one broke out in the fall of 2018, over the decision to retract a paper by mathematician Theodore Hill proposing a statistical model that aimed to explain why males of certain species show greater variability in various traits than females. The paper was controversial because — as Hill made clear on the very first page — he was particularly interested in mathematical ability among humans. Hill’s appendix consists of a long list of papers confirming — or denying — that boys show greater variability than girls on standardized math tests. This translates into more boys at the top and at the bottom of the hypothetical distribution of mathematical skill, and thus into a genetico-mathematical explanation of the observed fact that men hold most of the prestigious professorships of mathematics and win most of the prizes.

As a general rule, it is advisable to question the motivations behind an experiment or theoretical model that rationalizes an injustice embedded in the status quo. Hill did not explicitly claim that men are genetically more likely than women to excel in high level mathematics, but the retraction of his paper provoked outraged tweets from Jordan Peterson and Steven Pinker, among others, and when Quillette published Hill’s account of his grievance with the mathematical establishment, the comments connected the dots.

Enough has been written to allow readers to make up their own minds on the merits of Hill’s paper. The blog of Cambridge professor Timothy Gowers has a good introduction, at https://gowers.wordpress.com/2018/09/09/has-an-uncomfortable-truth-been-suppressed/, with reference to statements by some of the principals, and to Hill’s Quillette article. The Scientist gives a reasonable account at https://www.the-scientist.com/news-opinion/a-retracted-paper-on-sex-differences-ignites-debate-64873. The article on variability can be consulted at https://arxiv.org/abs/1703.04184v11. You can find Peterson’s and Pinker’s tweets without my help.

For me, Hill gave the game away when he wrote:

[P]ursuit of greater fairness and equality cannot be allowed to interfere with dispassionate academic study. No matter how unwelcome the implications of a logical argument may be, it must be allowed to stand or fall on its merits not its desirability or political utility. (Theodore P. Hill, “Academic Activists Send a Published Paper Down the Memory Hole,” Quillette, September 7, 2018.)

Hill’s commitment to “dispassionate academic study” would have been more credible had he acknowledged that the proportion of women among high mathematical achievers has increased phenomenally in the last few decades — too slowly, certainly, but still too rapidly to be explained by evolutionary genetics. “Even considering the extreme right side of the distribution, one notes that the percentage of worldwide participants who are girls in the International Mathematical Olympiad (IMO), an extremely difficult, proof-based, essay-style examination in mathematical problem solving, has increased from approximately 2.5 percent in the 1970s to 10 percent in recent years.” J. M. Kane and J. E. Mertz, “Debunking Myths about Gender and Mathematical Performance,” Notices of the American Mathematical Society, 59 (2012) 11-21. As a mathematician, Hill must certainly have noticed the dramatic (though still inadequate) increase in the proportion of women among speakers at international mathematics conferences over the same 50-year time period: “[O]f all lectures delivered by women in the history of the congress, 80% took place since the meeting in 1990.” H. Mihaljević and M.-F. Roy, “A data analysis of women’s trails among ICM speakers”, https://arxiv.org/abs/1903.02543.

What surprises me is not that scholars are prepared to mobilize dubious science in favor of an (at least) implicitly sexist agenda, but that many of those who find that agenda offensive nevertheless feel that the principle of free academic inquiry obliges them to engage with it intellectually. That can’t possibly be right. Holocaust denial is protected free speech in the United States — though not in some European countries — but it is nevertheless unwelcome on university campuses, as are, or should be, apologies for slavery or creationism. Also for white nationalism and climate-change denial, according to Catherine J. Ross, a law professor at George Washington University, responding to Trump’s executive order on free speech on campus. “Not everyone has a right to speak at a college,” added Ross. “Colleges get to choose.” See Beth McMurtrie, “Trump’s Free-Speech Order Could Have Been Harsher. But Higher-Ed Leaders Still Don’t Approve,” Chronicle of Higher Education, March 21, 2019.

That means in particular that we should not be compelled to waste our time engaging with such ideas. Claims that differences in group social achievements can be explained “scientifically” by genetic differences, although they are encountered much more frequently than holocaust denial, belong in the same category. And, scientific realism notwithstanding, the reason for this is not that the science (or the history) speak for themselves. On the contrary, in these as in many similar cases, the relation of the phenomena to the proposed interpretation is so obscure — “the gap is so vast between whatever such studies measure and anything resembling an appreciation of the difficulties of coming to grips with the conceptual content of mathematics,” as I wrote in a recent article — that the label of science simply doesn’t apply.

The past few years have seen a series of highly-publicized interventions by right-wing speakers on campus, designed to portray universities as nests of left-wing brainwashing. It makes no more sense to treat these provocations as exchanges of ideas than it does to debate a stink bomb. But universities find themselves in a double bind: if they cancel the speeches they are accused of failing to respect freedom of speech; but if the speeches are allowed to proceed the ideas are given a respectable platform. A personal anecdote: In March 2017 I was one of 150 Columbia professors who signed a statement objecting to the invitation of Charles Murray by College Republicans. The statement included the sentence: “Murray has every right to publicize his ideas, but we have a duty to object when he does so by assaulting foundational norms of sound scholarship and intellectual integrity.” That same day a Barnard student, well known for her contributions to the right-wing press, wrote to ask “Do you have any comment/explanation on why you chose to support free speech & Murray’s right to speak on campus?” There was no way to respond to such a question that could not provide raw material for a well-organized right-wing propaganda operation, so I simply declined to take the bait.

It’s hardly surprising, then, that academics are at a loss when confronted by objectionable ideas packaged as “science.” My suggestion is to stress, over and over again, that, as I wrote before, “what really needs to be explained is why any attention, whatsoever, is paid to these studies.” Easier said than done, to be sure, but I see no sensible alternative. 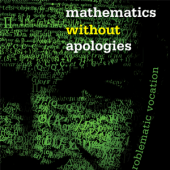 Michael Harris is professor of mathematics at the Université Paris-Diderot and Columbia University. He is the author or coauthor of more than seventy mathematical books and articles, and has received a number of prizes, including the Clay Research Award, which he shared in 2007 with Richard Taylor. Harris received his PhD from Harvard University. He taught for 17 years at Brandeis University, and has been a long-term visitor at the Institute for Advanced Study in Princeton, the Steklov Mathematical Institute in Moscow and its branch in Leningrad/St. Petersburg, and Harvard University, and has had extended visits to the Tata Institute of Fundamental Research in Mumbai, the Isaac Newton Institute in Cambridge, the Research Institute for Mathematical Sciences in Kyoto, the SFB in Münster, the Morningside Institute in Beijing, the Hong Kong Institute of Science and Technology, and Magdalen College, Oxford. In the fall of 1984 he was a visiting professor at Bethlehem University in Palestine. From 1985 through 1989 he was one of the coordinators of the Science for Nicaragua project of the Cambridge (MA)-based group Science for the People.