I rang in the new decade with a group of friends, non-activist types among whom I play the role of the nag who takes every opportunity to bring up climate change (“Yeah, these lentils are good! Good thing they also fix nitrogen in the soil and reduce farmers’ use of fossil fuel-based inputs!” I chirp, as my friends chew politely). But the other night, just after midnight, after someone brightly offered, “I think 2020 is going to be a good year!”, someone else (not me!) responded seriously: “yeah, welcome to the Decade of the Green New Deal, everyone.” This terminology invokes the timeline of the generational project that lies at our feet. It’s the ten-year mobilization outlined by H. Res. 109, the Green New Deal resolution introduced last year by Alexandria Ocasio-Cortez and Ed Markey – the first legislative effort that is properly calibrated to, in Ocasio-Cortez’s words, the “swing-for-the-fence ambition” that we so desperately need.

Earlier that day, Elizabeth Warren stood before a crowd in Boston’s Old South Meeting House, where colonists gathered some 250 years ago to plan the nonviolent direct action that became known as the Boston Tea Party, and laid out her own swing-for-the-fences vision of a better future. The contours of that vision trace the policy planks of Warren’s stump speech (and the progressive platform shared by Bernie Sanders): beating back the climate crisis, abolishing private prisons and detention centers, enacting Medicare for All and recognizing health care as a human right, establishing tuition-free public college. But while the New Year’s Eve speech didn’t cover any new policy ground, it did mark a shift in Warren’s rhetoric. More than just promising to fight for bold, ambitious ideas, Warren was actively envisioning what the world will be when those ideas become reality. “Imagine what our country will look like, imagine what your own life will look like,” Warren invited the crowd, “when we finally turn this page in our history.”

This exercise in manifesting is more than blind optimism. These are dark times, and Warren acknowledged up front the “chill of fear in the air” as undocumented folks listen for an unexpected knock at the door and trans people await a Supreme Court referendum on their very humanity. But imagination is not a naive balm, nor an escape into a disconnected fantasyland. Imagination, as Warren says, is powerful: “it forces us to contemplate change in our lives. To begin to expect change.”

Imagination also requires time and space, two things that are hard to find in a world marked by limitless connectivity and a constant drive towards productive optimization. Imagination requires stepping away from the 24-hour news cycle and engaging in a practice that the artist Jenny Odell calls “standing apart.” In How to Do Nothing, Odell writes:

“To stand apart is to take the view of an outsider without leaving, always oriented toward what it is you would have left… [It means] allowing yourself to believe in another world while living in this one… This ‘other world’ is not a rejection of the one we live in. Rather, it is a perfect image of this world when justice has been realized with and for everyone and everything that is already here. To stand apart is to look at the world (now) from the point of view of the world as it could be (the future), with all the hope and sorrowful contemplation that this entails.”

“Hope and sorrowful contemplation” aptly describes the emotional tenor of the Sunrise Movement, the activist group behind the Green New Deal, whose members sat on the floor of Nancy Pelosi’s office 14 months ago and refused to budge. In demanding a House Select Committee on the Green New Deal (a demand appeased but not fully met), the activists were asking Democratic party leadership to address climate change with the urgency required by decades of inaction. In 2018, a report from the UN’s Intergovernmental Panel on Climate Change found that global emissions of carbon dioxide must be cut in half by 2030 to limit global warming to 1.5°C – a ceiling that many observers believe to be already out of reach. For the U.S. to avoid blowing past the IPCC’s timeline, we would have to move incredibly quickly to implement the Green New Deal policies and programs outlined in H. Res. 109. That the IPCC’s warning and the Green New Deal framing are now broadly familiar to most U.S. political observers is testament to the successful and ongoing organizing by the Sunrise Movement and their allies, including U.S. Youth Climate Strike and the Climate Justice Alliance.

But while the scale of the movement is impressive – over the last year, Sunrise grew from 20 to 260 local hubs; 4 million people across the world turned out to the September 2019 climate strike – it is something less tangible that, to me, is even more inspiring: youth activists have imbued the climate movement with a renewed sense of optimism, last seen in environmental circles sometime before the inferno that burned 2009’s cap-and-trade bill to a crisp. It’s an optimism reflected in their plans and their protest style – both strategic (Sunrise actions are notable for their singing, clapping, and chanting, an intentional nod to past social movements) and sartorial (their block-lettered sweatshirts read “GOOD JOBS AND A LIVABLE FUTURE”). It’s an optimism that’s broad enough to incorporate and validate feelings of fear and anxiety (next week, my local Sunrise hub will host a ‘Grief Circle,’ where participants will be invited to process and share their thoughts on the climate crisis and how it impacts our communities). And it’s an optimism that’s absolutely essential to the movement’s longevity: as a youth-led organization, Sunrise and its members must necessarily imagine a world well after the IPCC’s deadline, now just 10 years away.

When Elizabeth Warren inveigled those gathered in that New Year’s Eve crowd to close their eyes and picture a better future, I thought of Molly Crabapple’s illustrations in the remarkable project ‘A Message from the Future,’ based on Kate Aronoff’s 2018 article in The Intercept. Narrated by the co-author of the Green New Deal, herself, the video is set a decade or so into the future, in the midst of a national climate mobilization that has long since begun in earnest. Ileana, the video’s protagonist, graduates from college and joins AmeriCorps Climate, restoring wetlands and bayous in coastal Louisiana, a good union job where she works alongside former oil workers. This is a world of bullet trains, universal childcare, and publicly-funded elections, a world that is, in Ocasio-Cortez’s words, “not only modern and wealthy, but dignified and humane, too.” It’s a world where, looking back from the vantage point of the 2030s, “we knew how lucky we were to have started acting when we did.” To me, the project echoes the brilliance of Sunrise’s political messaging: instead of framing the fight against climate change as one of pure sacrifice, allies are invited to join a forward-looking effort to proactively build the kind of society we want to live in. As Naomi Klein writes, this invitation functions as a “flat-out rejection of the idea that a dystopian future is a foregone conclusion.”

The Green New Deal opens up the space to imagine an alternative future. It’s a political project that’s about more than constructing wind turbines and retrofitting buildings; it’s about abandoning the carcinogenic ideology of growth at all costs and reaffirming the value of care, of maintenance, of communing. It’s a project based on the belief so simple it often goes unsaid: we could have something better than this. In her New Year’s Eve speech, Warren proposed a thought experiment to make this image more real: “If you were no longer paying half your income in rent, what could you do? Pay off your credit cards? Put money in a savings account? Get a dog?… If you were no longer stretched to make ends meet, who would you be? A coach? A volunteer? A parent?”

It might be surprising that this dogged insistence that the future could be better is coming in large part from activist organizations led by millennials, a generation strangled by student loan and credit card debt, rising rent, and the precarity of the gig economy. But these generational patterns are playing out across the globe. After the recent U.K. elections, the journalist Sarah Jaffe observed that even though Labour’s policies were popular, the party faltered in convincing older people they were achievable. “Capitalist realism – ‘there is no alternative’ – is a hell of a drug,” Jaffe remarks. “The hardest thing is convincing people we can do it… Younger people believe you can do it. Older people who lived through Thatcherism do not believe you can do it, and that was the breakdown.” Here in the U.S., too, progressive policies like enacting a wealth tax and ending cash bail are broadly popular across regions, racial groups, even political parties. Our task is no longer really about persuasion. It’s about getting people to vote in accordance with what they know in their gut to be true. It’s about turning away from cynicism, which as the writer Alexander Chee recently noted, “poses as rebellion while supporting the status quo.” It’s about enthusiastically talking to our friends and colleagues and parents and neighbors about the future we can create, if we’re willing to fight for it.

It’s telling that this generational imperative is fully understood even by the apolitical crowd at my New Year’s party. It’s my slice of the millennial cohort (b. 1992), after all, whose political awareness began during the hope and change years of high school, only to quickly be dampened by the economic despair of the recession, the unmasking of injustice by Occupy and Black Lives Matter, and then the electoral earthquake of 2016. My peers and I entered adulthood propelled by Obama’s feel-good assurances, only to find that we were going to have to fight for our future perhaps harder than we realized.

In her New Year’s Eve speech, Warren noted, “If you can imagine that something better lies on the other side of the chaos and ugliness of the last three years – then you are more than halfway there. The first step is to see it. The next step is to fight for it.” I don’t think there’s any progressive anywhere who’s naive about what we’re up against. But since it’s going to be a fight, let’s make it one worth winning. In ‘A Message from the Future,’ Ocasio-Cortez is even more concise: “We can be whatever we have the courage to see.” As we enter a new decade, I can see a better future ahead, and I believe that we will win. 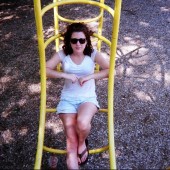