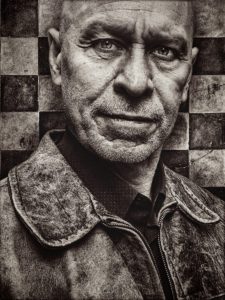 Photo courtesy of The The

I read the most bizarre article in The Guardian last week.  It was about Matt Johnson and his band, The The.  The headline had me vexed from the getgo: ‘With his band The The, Matt Johnson lit up the 80s. Now pop’s bright light is shining again.’  I had this total WTF? moment.  The The were around in the 80s, yeah. And they had some hits in their native UK.  And some underground hits here on this side of the Atlantic (meaning the US and Canada).  The 1980s trilogy of albums, Soul Mining, Infected, and Mind Bomb bordered on brilliant. They were menacing, melodic, deeply alienating.  And they charted in the UK, Infected even going gold there.  Infected and Mind Bomb even made the charts in the US, the former topping out at #89 and the latter at #139.

But it was the 1990s when The The hit it big.  Johnny Marr, ex- of The Smiths had joined Johnson and his rotating cast of players in time for Mind Bomb. I was 16 when this one came out, and I bought it because of Marr.  I didn’t know what to expect, but I sure as hell didn’t get more of The Smiths.  But I was hooked.

Anyway, I was telling a story.  In 1992, The The released Dusk, which was a staple of MTV and MuchMusic, particularly the single, ‘Dogs of Lust.‘  The video is kinda unforgettable.  Johnson and the lads are in a swampy basement studio, all of them dripping sweat.  It starts off with the harmonica riff, and then the drums and guitars kick in, followed by the bass.  This was the rockingest track Johnson had ever written, and Marr’s guitars were finally put to the use they’d been meant to.  The song chugs along, guitars, bass, harmonica and Johnson’s alienated voice over.  And then it just stops in mid-beat.  I loved this song for that.  ‘Dogs of Lust’ was their highest charting single in the US, hitting #2 on the Modern Rock lists.  And the album hit #2 in the UK, besting Mind Bomb’s #4 showing.

In 1995, Johnson returned, minus Marr, with a cover album of Hank Williams tracks, Hanky Panky.  He put his own twisted twist on Williams.  In particular, ‘Long Gone Daddy‘ became this vicious, nasty, and brutal (they don’t all mean the same thing, you know) track, as the guitars all piled on top of the chugging rhythm section, with Johnson’s vocals sounding like he was a real gone daddy, phoned in from the road somewhere.

After a 7 year break, Johnson was back in 2002 with Naked Self, which remains my favourite The The album.  His sound was updated for the new millennium, fleshed out, more swing, more beat.  He took his heavy 90s sound and made it beautiful here.  And he let the guitars hang out, especially in the instrumental ‘Diesel Breeze’ and the heavy-hitting ‘Voidy Numbness.’

Johnson’s lyrics over the course of his 20-year career to that date hadn’t varied much.  He sang of alienation, of all the ways we were getting fucked by the system.  ‘The Beaten Generation,’ from Mind Bomb may as well been the clarion call of Generation X.  If only I had known then what I know now about our generation…but, of course, in 1989, I wasn’t part of Gen X yet.  Gen X was defined by demographers as the tail end of the Baby Boom, it was a mini-generation of sorts, lasting from 1961-1966.  As a child of the 70s, I was too young for this.  And then, at some point, Gen X expanded.  And I was in it.  My sister, born in the late 70s, though, I’m not sure if she was, or if she’s a millennial, it depends on who you ask.

And then he disappeared from view.  Johnson only resurfaced last year with The The.  The Guardian article explains as much as it omits.  Johnson’s younger brother, Eugene, died suddenly in 1989, when The The was in the midst of its world tour supporting Mind Bomb.  The Guardian makes it sound like this is when he disappeared.  It seems to tie Eugene’s death to the end of The The, except, of course, it was another 13 years before Johnson hung up his guitar, and intentionally disappeared.

The poor guy has seen his share of tragedy, as it was the death of his older brother, the artist, Andrew ‘Andy Dog’ Johnson, in 2016 that galvanized him to get the band back together.  In the meantime, he had turned to photography and fighting gentrification in East London.  He also wrote the soundtrack’s to his other brother, Gerard’s two films, Tony (2009) and Hyena (2014).

But the loss of Eugene continued to sting, and in 2017, the documentary, The Inertia Variations, looked at the impact of Eugene’s death on Johnson, and his creative process.  To celebrate the documentary, Johnson hooked up with Marr to release a new single, the first in 15 years, ‘We Can’t Stop What’s Coming.’

So The The are back, hitting the road on a new tour around the UK, Ireland, Europe, Canada and the US.  The new lineup is missing Marr, but it’s a veteran lineup, many of whom have worked with Johnson in the past.  He is also promising a new album sometime this year, though it’s not clear if he means to do under the The The moniker or not.