Showerman Gets the Blues

Fans of Showerman** know what he knows, that cleanliness is next to Godliness, and not as if He’s your next-door neighbor to be called upon when a shortage of flour is discovered mid-recipe, while cooking, nor when a shortage of intelligence is discovered mid-life, while listening to NPR as you run out of flour, no, cleanliness is, for Showerman, just about every goddamn thing, from Alpha to Omega 3, and all the good fats in between, some of which, he is told, can be squeezed from fish, cooked or cured.

Now, Showerman believes in the blues as the place where the pentatonic scale, the root of African and Celtic music, met on the desolate soulscape of the American South, Faulkner’s home field, where enslaved Africans and Scots-Irish immigrants congregated and found common aural ground, inventing a music that, in time, became the soundtrack of liberation.

But Showerman does not believe in the blues up his ass, which is what he recently discovered upon entering the temple, which, as fans, or, if you will, disciples, will know, is the bathroom, where the tools of cleanliness, personal hygiene as it is called in this narrow space, are stored, and where, most importantly, the ritual of the shower is performed.

Showerman cannot describe this ritual in detail (see: Showerman, Season. 1, Episode 3), but he can explain how it was disrupted, detained, may he say, indefinitely postponed, by the discovery of the blues in the toilet bowl, almost up his ass.  Not that he is constipated.  No, these blues are in the waters, in the plumbing, not to be washed away until, well, he believes not until Judgment Day, which fast approaches anyway because elected officials and a sentient virus have conspired to convene St. Peter’s court as soon as they can, before we know it.

In the waters, indeed, Showerman says–the water that fills the toilet bowl is deep blue, bright blue, belligerent blue, always blue, no matter what fills it when at rest, you know, no matter how many times you flush the goddamn thing.  This color is the product of a Clorox capsule that Showerman’s cellmate  mistakenly ordered–it was supposed to be just bleach–and secretly installed to protect her from his probably offensive effluvia, the inevitable byproduct, in both senses, of co-habitation, and to reduce the socially necessary labor-time required by cleaning up after him.

Be of good cheer, dear readers, Showerman knows you don’t want to talk about this shit, and yes, he does mean shit, but he wants to know:  Would you lower your ass into the sky?

Showerman cannot, or chooses not to, because, well of course not, how would you do such an artful thing? 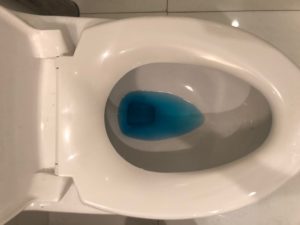 Perhaps he is constipated.  The thing is, he thinks, this radiant, deep/bright/belligerent blue is not the appropriate receptacle for his issue, and by that he means not children–although these too are products of biomechanical function–but excrement, the inside turned outside, the waste of the body made measurable.  In these dark materials, he thinks, the chronicle of a death is foretold every day.

Has the blue sky fallen, Showerman wonders as he takes a shit, has the world turned upside down?  Nah, he says to himself, it’s just turning green, so go ahead, wipe your ass, flush the toilet, take a shower.  Tomorrow isn’t another day, he thinks, it’s already here.

**The Chronicles of Showerman begin with his post-surgical adventures, recorded here and at Facebook.