Last week I mentioned the haunting and beautiful Irish Famine memorial carved from bog wood by the artist Kieran Tuohy.

I spend a lot of time thinking about and, ultimately, teaching Famine memorials in both Irish and Public history classes.  For the most part, Famine memorials are similar to Tuohy’s sculpture, though perhaps not as haunting.  They show desperate, emaciated figures carrying their worldly goods in their arms and trying to get to the emigrant ships leaving from the quay in Dublin, Derry, Cork, etc.  The Dublin memorial is perhaps the most famous.

The Irish memorials tend to reflect stories of leaving, the desperate emigrants heading to the so-called New World.  Death is secondary to these narratives, though just as many people died as emigrated due to the Famine.  Take, for example, my favourite memorial on Murrisk, Co. Mayo.  This one depicts a coffin ship, though unlike many other monuments, it reflects death, as skeletons can be found aboard the coffin ship.  In fact, if you look carefully at this image, you can see that the netting is actually a chain of skeletons, depicting the desperate refugees who died aboard these ships.

The stories told by Famine memorials in North America differ, however.  They offer a solemn view of the refugees arriving here, sometimes acknowledging the arduous journey and the pitiful conditions in Ireland.  But they offer a glimpse of what is to come.  Perhaps none more so than the Boston Famine Memorial.

The Boston Famine Memorial is located along the Freedom Trail in Boston, at the corner of Washington and School streets downtown.  Like most Famine memorials around the world, it dates from the era of the 150th anniversary of the Famine in the late 1990s.  The Boston memorial was unveiled in 1998.  It is not a universally popular one, for perhaps obvious reasons, and attracts a great deal of mocking.  It’s got to the point that now there are signs surrounding the memorial asking visitors to be respectful.

It is comprised to two free-standing sculptures.  The first shows the typical, desperate, starving, wraith-like Famine refugees. The man is desperate and cannot even lift his head, whilst his wife begs God for sustenance as her child leans towards her for comfort.

But it’s the second sculpture that is problematic.  This one shows the same family, safe in America, happy and healthy.  In other words, we get the triumphalist American Dream.  But, there are a few gaps here.  First, perhaps the obvious gap, the nativist resistance the Irish found in the United States.  And perhaps more to the point, whereas the man is dressed like a worker from the late 19th/early 20th century (even then, this is 50-60 years after the Famine, the woman is dressed as if it’s the mid-20th century, so 100 years later. 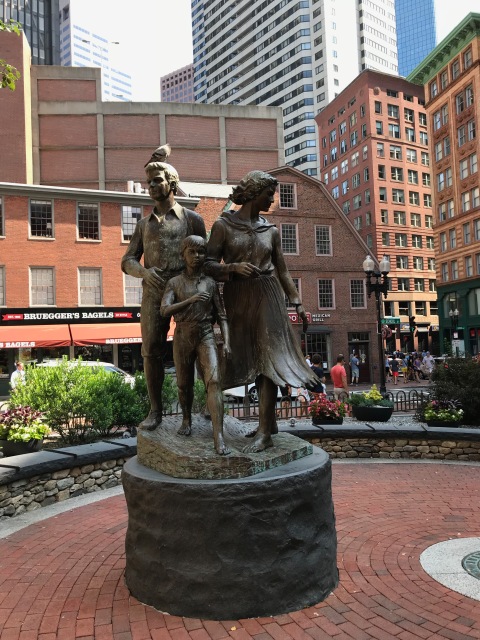 Certainly, the Irish made it in the United States.  The Irish became American, essentially, and assimilated into the body politic of the nation.  But this was not instantaneous.  It took a generation or two.  It is worth noting that the first Irish president was also the first Catholic president, and that was still 115 years after the start of the Famine, with John Fitzgerald Kennedy being elected in 1960.  Irish assimilation in the US was not easy, in other words. 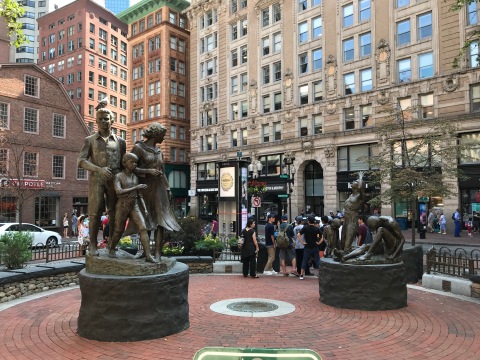 And then there’s the triumphalism of the American Dream which, in reality, is not all that accessible for immigrants in the United States, whether they were the refugees of the Famine 170 years ago or they are from El Salvador today.  And this is perhaps something unintended by the Boston memorial, given the time lapse between the Famine refugees and the successful, American family.