From the Vaults: The Charlatans — Tellin’ Stories

From the Vaults: The Charlatans – Tellin’ Stories 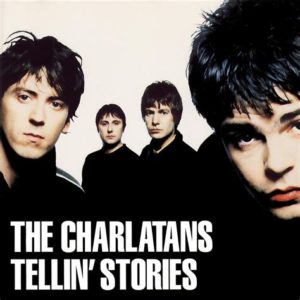 The Charlatans have long been one of my favourite bands, if not my outright favourite. Though they’re not from Manchester, they burst onto the scene with the Madchester Sound in the late 80s/early 90s, together with the Happy Mondays, the Stone Roses, Inspiral Carpets, and the like.  Unlike all those bands, which imploded/broke up/etc., the Charlies have kept on trucking for the past 30 years.  They recently celebrated their 30thanniversary in their hometown of Northwich, hosting the North By Northwich festival.

This summer, I was living in an extremely rural area, no cell service, and about a 20 minute drive to find a signal.  The car is where I do my serious music listening; I usually just stream it. Not an option that far in the boondocks.  So I dug up a bunch of CDs and threw them in the car.  But the one that remained in the disc drive (my car model year was the last to have a disc drive) was the Charlatans’ 1997 album, Tellin’ Stories.

This album is a moment in time for the band.  Founding member, keyboardist Rob Collins, died in a car accident whilst recording the album in Wales.  But it was also the band’s most successful album, hitting #1 in the charts in the UK and Ireland and yielding 3 Top-10 singles in the UK, Ireland and Europe, including two #1s, ‘North Country Boy’ and ‘One to Another.’  But over on this side of the pond, I don’t think the album made much of a ripple.  I don’t know anyone else who is a Charlatans’ fan.  So, clearly, I am the band’s only fan in North America.

Listening to this album over and over again was a lot of fun.  I had listened the hell out of it back in 1997, on my commute from home in downtown Vancouver to Simon Fraser University as I completed my Master’s degree.  But, twenty-one years on, it was a whole new experience.  I gained a deeper appreciation for the album, especially the deeper cuts.

The Charlies were always, to me, a band capable of writing some absolutely killer tracks, and every single album they’ve released over the past three decades has at least one just absolute killer track.  Tellin’ Stories’ killer track is ‘One to Another.’  Sporting a vicious drum loop courtesy of the Chemical Brothers (with whom frontman Tim Burgess has worked off and on for seemingly forever), and a chugging, clanging rhythm, this might be my favourite Charlatans song of all-time.  But, the entire opening suite of tracks, ‘With No Shoes,’ ‘North Country Boy,’ ‘Tellin’ Stories,’ and ‘One To Another’ might be the best opening shot I’ve heard.

The Charlatans may have come out of the Madchester scene, but they never really fit in. Sure, Collins’ swirling organs gave them a unique sound, and a trippy one at times, but they were otherwise a rock’n’roll band, structured around the guitars of Mark Collins and the tight rhythm section of bassist Martin Blunt and drummer Jon Brookes (Brookes died of a brain tumour in 2012, and has never been officially replaced behind the kit). And Tellin’ Storiesis when they emerged with a blues-based rock sound. This opening suite lays their cards out on the table, even with the drum and strings loops, and other nods to modernity.

The middle of the album, the tracks ‘You’re a Big Girl Now’ (a mostly acoustic one), ‘How Can You Leave Us,’ ‘Area 51,’ and ‘How High,’ are a rollicking collection of tracks that carry on in the vein of the openers.  When I was younger, I always thought that this was where the album sagged under the weight of the opening and closing suites.  But, listening to the album ad nauseum, and almost never entirely through, this summer, I came to appreciate these tracks all over again, especially the instrumental ‘Area 51,’ recorded before Rob Collins’ (he has no relation to Mark Collins, the guitarist) fatal accident.  Centred around Rob’s organ, Mark’s guitar juts in and out of the spaces, whilst Blunt and Brookes fill in the remaining gaps.  One of my favourite instrumentals of all time.

‘Area 51’ is one of two instrumentals, the other being ‘Rob’s Theme,’ which is what sounds like a collection of abstract and random beats and organ riffs Rob Collins lay down in the studio that the band then put together to make a song of, complete with the sounds of birds whistling outside of the studio.  It is, of course, Collins’ last sounds with the band.

I am currently in Beijing for the month, and I can again stream anything I want. Except for Tellin’ Stories.  The disc is still in the drive of my car, sitting faithfully in Boston, waiting for me to come home.  But Tellin’ Storiesisn’t in iTunes, and it’s not on Spotify, nor is it on Amazon.  In fact, it is the only album from the Charlatans’ lengthy discography not available. Because, obviously it would be so since it’s the only album I want to listen to right now.