The older the universe gets, the longer it takes to respond.

A red-tailed hawk spreads its wings, just engaging its impulse to rise, but the wings keep spreading. Night falls on the nearly abandoned city.

War breaks out between what used to exist and what never existed.

Though our arrangement of convenience never blossomed into love, we always had strong coffee and the best seasonal fruit. When I leaned in and paid attention I could hear you.

I won the sonnet contest by being clever enough to rhyme “orange” with “door hinge,” but the prize money didn’t go as far as I would have liked. I had to buy shots for the other poets, a beret and a leather waistcoat. I had to subscribe to three new journals and rent a unicorn for midnight rides, naked rides through the town.

I was in debt. I needed to win another contest, but I had nothing: late night phones, broken bones, blueberry scones, uneven flesh tones, combat zones, primordial moans . . . A whole new century approached.

The cigar smoke of anthropomorphic birds constantly testing a framed panel’s sharp edges creates an effect by which the reader intuits a world constantly picking its own aesthetic scab, so to speak, as small stories unfold in the foreground. Perhaps, the plucky heroine’s legendary love of flying eyeballs has her skipping down the sidewalk to visit Von Dutch, whose equally legendary pin-striping technique often incorporates the aforementioned flying eyeball iconography. The pattern on her dress is flying eyeballs. The barrette securing her ponytail is made of an eyeball spreading its wings. “Hey, Little Eyeball,” taunt the crows, “The great Von Dutch don’t see no one.” But he’ll see me, thinks Little Eyeball. What sort of recluse creator wouldn’t drop everything to meet his biggest fan?

Glen Armstrong holds an MFA in English from the University of Massachusetts, Amherst and teaches writing at Oakland University in Rochester, Michigan. He edits a poetry journal called Cruel Garters and has three recent chapbooks: Set List (Bitchin Kitsch,) In Stone and The Most Awkward Silence of All (both Cruel Garters Press.) His work has appeared in Poetry Northwest, Conduit and Cloudbank.

Montage of Life in a Screen by James Quinn 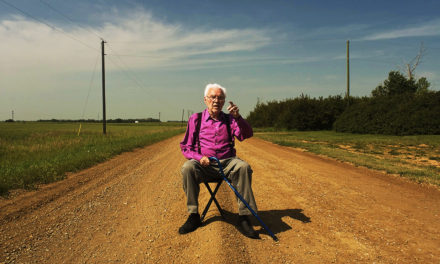