Neifile goes next in The Decameron, Book/Novel 2, ca. 1348.  She tells the story of Abraham the Jew, a devout adherent of the faith, who, being a friend of Johannot de Chevigny, a fellow merchant, is constantly subject to proselytization–convert now or forever find no peace!  That is what his friend keeps saying to Abraham, who finally says OK, OK, but I’m going to the headquarters, all the way to Rome, to see what your religion is made of, where it got built.  There he finds strange grounds for new belief–he converts to Christianity because its practitioners are whoremongers, pedophiles, mendicants, and morons, yet their empire keeps expanding.  Here is my retelling of that story for our times, as a screenplay, of course.

Abraham bent over a church pew, the reverse shot shows his old friend John, another stalwart of the garment trade, standing in the aisle, at the back of the church, arms folded. The camera rises, we survey the incredible wealth and majesty of this cathedral, and the 2000-year old Church it represents.

ABRAHAM: Jesus fucking Christ, wouldja?  I’m a Jew, what do you want, a conversion experience?  How can I be a Christian, what are you people FOR–except, what, the end of everything?  You hope for death, you live for it, you wish for the end of the fucking world so you can see the large one, the guy who tortures us because he thinks it’s fun?  How can you be so stupid?  This is not a benevolent deity, he’s an angry God, and he wants to make you suffer.  Look at what he did to Job.  How did you Christians never get this?  Have you never seen a movie by the Coen brothers?

JOHN: I beg you, Abe, please try, I want you to survive this.

ABE: Survive what?  Life itself?  Fuck you, I don’t need a God to get through this.  Not yours, anyway, a sniveling little shit from the building trades, a guy with a level and a hammer, a guy who says go ahead, kill me? No fucking thanks, Johnny.

JOHN: C’mon, man, these are the end times, this is for real.  Right outside, just go outside, and you’re a dead man.  I want you with me.

ABE:  All right then.  Take me to your leaders.  Where are these preachers, these fucking evangelicals?

Large man with a MAGA hat: “Every man has a past, he’s no different.  He’s been a sinner.  But he’s our savior.  He’s taking this country back from the elites in Washington, Hollywood, wherever, he’s leading us back to where we belong.”

JERRY FALWELL, JR.: “It’s just strange to me how so many are overreacting. The H1N1 virus in 2009 killed 17,000 people, it was the flu also I think, and there was not thesame level of hype. You just didn’t see it on the news 24/7 and it makes you wonder if there’s a political reason for that.”

ABE: “Sir, we now have more than 4,000 cases in New York State.  Are we overreacting by closing the schools and shutting down the restaurants in the city?”

JERRY FALWELL, JR. We have moved to online learning at Liberty University.

ABE: “But Trump is still your guy, you believe what he says about the virus?”

ABE: “Your father Billy founded the magazine Christianity Today, and it’s now said Trump is a venal, corrupt bearer of untruth, a liar and a thief.  What do you make of that?”

FRANKLIN GRAHAM: Christianity Today released an editorial stating that President Trump should be removed from office—and they invoked my father’s name (I suppose to try to bring legitimacy to their statements), so I feel it is important for me to respond. Yes, my father Billy Graham founded Christianity Today; but no, he would not agree with their opinion piece. In fact, he would be very disappointed. I have not previously shared who my father voted for in the past election, but because of this article, I feel it is necessary to share it now. My father knew Donald Trump, he believed in Donald Trump, and he voted for Donald Trump. He believed that Donald J. Trump was the man for this hour in history for our nation.

Look at all the President has accomplished in a very short time. The economy of our nation is the strongest it has been in 50 years, ISIS & the caliphate have been defeated, and the President has renegotiated trade deals to benefit all Americans. The list of accomplishments is long, but for me as a Christian, the fact that he is the most pro-life president in modern history is extremely important—and Christianity Today wants us to ignore that, to say it doesn’t count? . . .

Is President Trump guilty of sin? Of course he is, as were all past presidents and as each one of us are, including myself. Therefore, let’s pray for the President as he continues to lead the affairs of our nation.

On the way home from D.C.  Abe and John doing the road trip.  They don’t look at each other, they speak as if the other isn’t there. Almost Elizabethan, one monologue after another, after all.

Abe and John from the dashboard, the third reverse shot is generic Interstate highway.  The soundtrack is “Gimme Shelter” but when they get to the New Jersey Turnpike, it softens, now we hear Tom Petty, “Runnin’ Down a Dream,” and Bruce Springsteen, “Further on Up the Road.”  These are found and lost, in and out, they break in loudly but fade, waiting to return.

ABE: You convinced me. You Christians are the future. You’re the going concern. Where we been, Johnny?  We been to Atlanta, been to Lubbock, went to Virginia and Oklahoma, too, Liberty University, Jerry fucking Falwell, Jesus Christ, and these people are totally depraved–they would sacrifice their own brothers and sisters on the altar of blame, saying you did this to yourself.  And yet they thrive.  They fornicate, they blaspheme, they actually want to starve their own kind.  And yet they carry the day. They got a president, they got a government. They rule the fucking world.  I’m a get with them, because if I don’t I disappear.

You understand the logic here?  Your religion, your beliefs, make no sense, and yet they regulate our thinking about the past and the future.  Why?  Remember Pascal’s Wager?  Better get with the program, because if you don’t lay down that bet, heavy leverage, you’re fucked?

JOHN: What are you talking about?  These people don’t represent me.

ABE: Sure they do.  I’ll give you this, God is a man, that’s a revolutionary idea.  Otherwise, what have you got?  Me, I got the messiah, but who knows when he turns up?  Meanwhile I got the rule of mercy, forgiveness, forbearance, I’m not gonna judge you because I’m not qualified, I don’t have the credentials. I’m not good enough to tell you what you’re worth.  You got hope, that’s about it, although, come to think of it, we’re waiting on the same event, some return of what we’ve repressed.

JOHN: Jesus, Abe, you make me want to be a Jew.

ABE: We got room in the congregation.  But you’d be joining the wrong club.  I’m signing up with yours 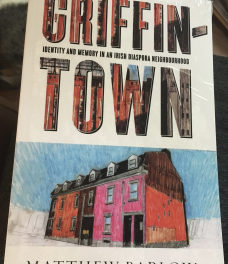 Merci Beaucoup and Thank You 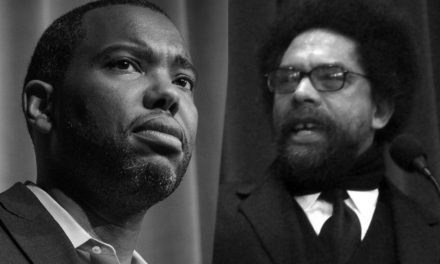 A Tale of Too Many Cities: The Trial of Black Nationalism in the Debate between Coates and West